Out here in Korea there will be five main contenders for the medals in the 110m. They all vary in technique, and especially in major championships experience. No doubt the athletes themselves are going to have to pull out all the stops to get the gold medal but I am sure that its not going to be easy to decide the winner.

I will be profiling each of them over the next couple of days. I will profile beginning with the lowest to the highest ranked athletes: 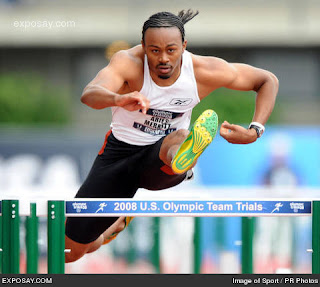 Aries Merritt had an amazing indoor season, being ranked second and winning every race. He then progressed to the outdoors very early, at the beginning of April with a 13.36 in good conditions. His times since then have been consistent in the 13.2s and that will be able to see him through to the final in Daegu. A time close to, or better than, his personal best will be particularly dangerous as 13.09 (set in 2007) is in the medal zone traditionally at the Olympics and World Championships. He is a competitive racer, having beaten Jason Richardson a couple of times, notably winning Oslo Diamond League and coming second in the USA Championships behind David Oliver. Merritt also won the World Junior Championships in 2004, beating Dayron Robles who is the year below.