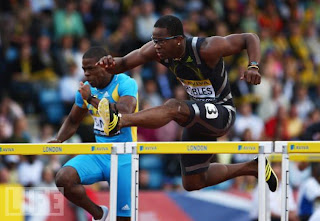 World Record holder (12.87seconds) and Olympic Champion in 2008 when only 21. This Cuban, at the height of 6ft4, is in top shape to grab the gold in Daegu. He has won all but one of his outdoor races this year, though that one loss was only because of an uncharacteristic technical error in Barcelona.  He has one of the best techniques of any hurdler ever, though owing to his height doesn’t have much problem clearly the obstacles. He is never to be underestimated when put under pressure. He won the Olympic Games in 2008 and the World Indoors in 2010, no mean accomplishment, and he is still only 24!


He lacks the speed at the back end of the race like Liu Xiang, but his start and competitive nature will certainly stand him in good stead when he steps onto the track. He may have been struggling with injury as some press have suggested, but in the London Diamond League he won in a season’s best of 13.04, having cruised the heats in 13.16. 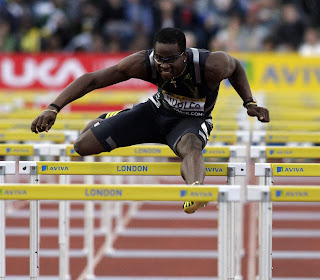 Unlike most hurdlers that preceded him, Robles adopted the 7-stride strategy to hurdle one early on in his career. This removal of a step has allowed him to be the most competitive and fastest hurdler in the world to the first hurdle. The likes of past greats such as Colin Jackson (PB 12.91) and Allen Johnson (PB 12.92) who were much shorter had no chance of doing this, but certainly mastered the 8-stride technique. Many of the athletes seem to be adjusting to this 7-stride technique but it requires a lot of physical strength and speed to pull off well. I personally use 8-strides and I don’t seem to have much problem being competitive into the first hurdle when I react well. However, there certainly seems to be a paradigm shift and when the top hurdlers start something new, the younger, less experienced athletes tend to follow suit, even if they don’t know what they are doing.

Robles has the experience, the talent, and the necessary speed to get high on the podium. Whether on not he has found the form he needs this year to run near his personal best is up to him to demonstrate. I believe the Gold medal could be within the magic 13 second barrier and potentially near a World Record. Only David Oliver has been under 13 this year but Robles has been there before and he can certainly do it again.