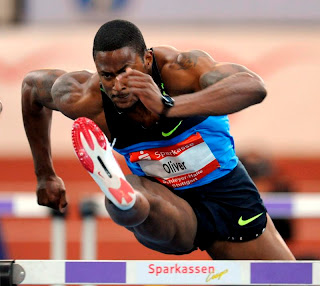 With shoulders like mountains, the World No. 1 this year on rankings with 12.94 (the only man under 13 this year), and unchallenged No. 1 last year, Oliver is a man that has a lot of potential. Third fastest hurdler ever, at 12.89 set last year, he is built like a tank. He is only 6ft2in but weighs in excess of 100kg. The hurdles certainly can’t stop him and despite his recent losses, can anyone else stop him? He knows what it takes to race at the speed required to win gold, but can he hold it under the pressure. As the oldest athlete of those who I have profiled, he has some brilliant experience, but not as much as the likes of Robles or Xiang. He won Olympic Bronze in 2008, World Indoor Bronze and won every Diamond League last year.


He is also a 7-stride hurdler, and has certainly got the strength to handle it. His lead leg is the fastest and most powerful of any of those in World Athletics at the moment. This speed however can be his down fall though as he sometimes brings it down onto the hurdle. Although his size isn’t necessarily hindered by the hurdles, a slight knock of balance might be the difference between gold and 5th in this race. The four other profiled athletes will know the pressure on each of them to produce clean, technically perfect races to perform to the level needed for the Gold medal. With not much separating them on paper, any technical error might lead them amiss. Oliver knows this.

He is, on his day, extremely powerful and technically efficient. Once his is moving and gets top speed his can run anyone down, maybe even Liu Xiang. As long as he holds his head, he could be the World Champion and World Record Holder. Like most of the others he has run in Daegu’s Colorful annual meeting, winning last year and this year, beating Robles in the former. He knows the format of the stadium, the track and the weather. This will all work to his advantage. There is nothing better than racing on a track where you have always done well. Robles, Xiang, Merritt and Richardson know Oliver’s abilities and certainly know each others. It won’t be long until we find out who is the No.1 in the World.